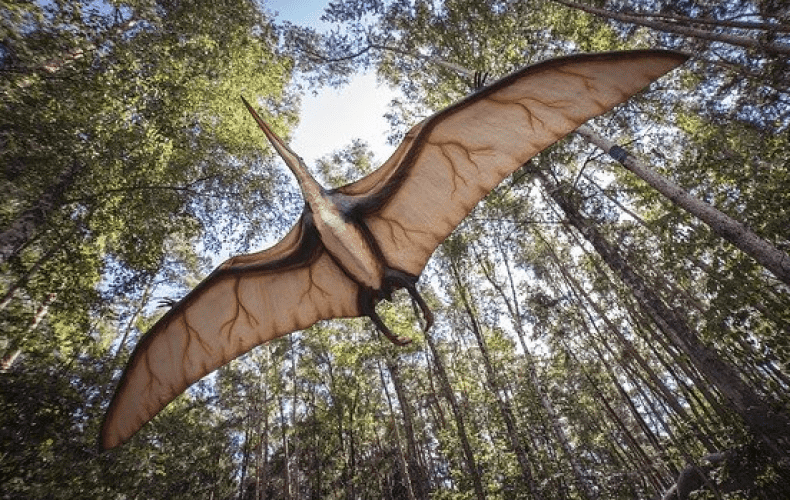 Fossils of pterosaurs, the earliest reptiles to evolve powered flight, were unearthed in the 19th Century but their evolution has remained a mystery. They were around for more than 150 million years until the end of the Mesozoic Era, about 66 million years ago. Recently, scientists using new fossils and an imaging tool called x-ray microcomputed tomography (micro-CT) have unraveled their development. The solution of the mystery not only revealed a sister species of pterosaurs which share a common ancestor with them, but also added to our understanding of the evolution of flight in vertebrates (animals with backbones).

Nothing captivates children more than the image of a pterosaurs, a flying reptile closely related to dinosaurs, like Petrie in the movie "The Land Before Time". The skeleton of a pterosaur also shocked early paleontologists in the Eighteenth Century. Pterosaurs had enlarged and exaggerated fourth digits to support their membranous wings as well as other major changes to their skeletons, hips, chest bones and pelvises. Paleontologists imagined that they were sea creatures that used their long front limbs as paddles or flippers. Some pterosaur species could run, wade and swim. Some scientists speculated that pterosaurs were flying marsupials or relatives of bats, although they were larger than bats, with wingspans from 33 to 36 feet.

In 1809, George Cuvier, a French naturalist, coined the name "ptero-dactyle", or wing-finger, for a flying reptile skeleton found in Bavaria. We now know that many different pterosaurs roamed the earth in the Triassic Period. But since the bodies of the oldest recognized pterosaurs were already evolved for flight and few fossils had been identified which had some signs of the anatomical changes before flight became a reality, it was difficult to figure out which of the non-flying Mesozoic reptiles were their precursors. There were also problems with the preservation of the fragile fossils of the early pterosaurs.

A multinational collaboration by scientists used micro-CT to analyze skulls and skeletons of specimens that were recently unearthed in Brazil, Argentina, the US and Madagascar. Micro-CT is an important new technology which gives high resolution, 3-D images allowing scientists to see through rock and access covered bones or cavities. The words for tomography are derived from the Greek words for slice (or section) and drawing. A CT image is composed of cross-sectional slices. The images that were produced using this new technology help to solve the 200-year-old mystery of the origins of pterosaurs.

Come Fly With Me

According to Dr. Martin D. Ezcurra, a scientist at the Seccion Paleontologia de Vertebrados CONICET-Museo Argentino de Ciencias Naturales in Buenos Aires, Argentina, "The use of microCT scans to reconstruct structures that are covered by bones is an extremely powerful tool that allows (for) reconstructing the brain and associated soft tissues... "which include the inner ear and other structures. The anatomical shape of these organs gives important information about the behaviors of an animal, such as whether it was agile. Scientists can use the organ shapes obtained by micro-CT to infer relationships among the ancient speciesand even between them and living animals by studying and comparing the 3-D reconstructions.

One of the mysteries that they solved was narrowing the gap in time between the earliest known pterosaurs and their non-flying relatives. For this to happen, the closest relatives of pterosaurs needed to be identified. The hole in the family tree of pterosaurs was plugged by the discovery of lagerpetids. The oldest lagerpetids were found in 237-million-year-old rocks. Dr. Ezcurra and his team were able to narrow the gap in the evolution of these flying reptiles from 28 to 18 million years with this discovery. The 3-D reconstructions showed that the flightless lagerpetids had skulls with some of the same neuroanatomical traits of all pterosaurs. Although they weren't able to fly, it is likely that the common ancestor of both pterosaurs and lagerpetids already had physical features which eventually would allow the pterosaurs to conquer a new dimension, air.

Thinking on the fly

The development of flight is a major innovation in vertebrate evolution. Micro-CT may be the means for investigating the development of other important innovations in vertebrate evolution. According to Dr. Ezcurra, the collaboration is currently using the micro-CT scans to analyze soft tissues of ancient reptiles to figure out their various lineages. They are also working on newly collected specimens to help improve our understanding of the origins of dinosaurs.

Roberta Batorsky is a science writer for The Munich Eye.

A new research study led by the University of California, Berkeley engineering Professor John Dueber has shown that indigo...