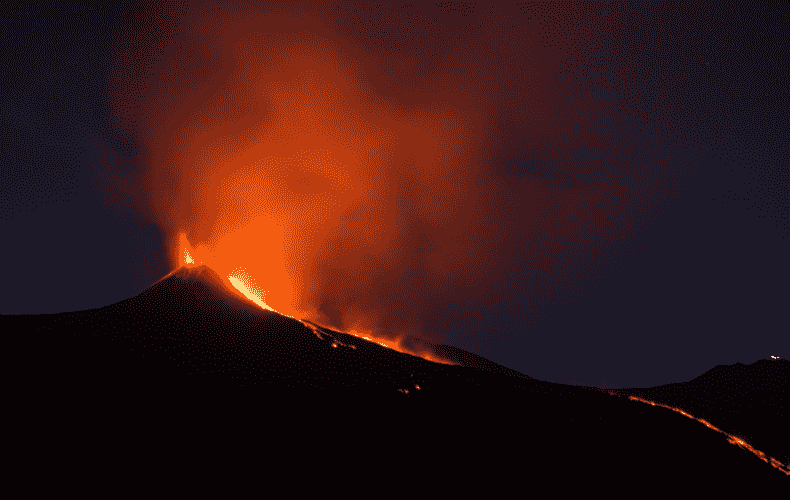 On the Spanish Canary Island of La Palma, a volcano erupted on Sunday in the Cumbre Vieja area for the first time in 50 years. At 15:12 local time, there were several violent explosions in the municipality of El Paso in the south of the island, reported the newspaper El PaÃ­s. Later, huge fountains of fire could be seen on television shooting into the night sky.

By late evening, at least seven vents were counted, different places where ash, smoke and lava were thrown up into the air, state television station RTVE reported. Authorities began evacuations. Spain's Prime Minister Pedro SÃ¡nchez canceled a planned trip to the U.S. and arrived on La Palma in the evening.

There were initially no reports of casualties. The eruption was in a non-populated area of the island, which has a total population of 83,000, local television station Canarias7 reported, citing the regional head of the Canary Islands government, Ãngel VÃ­ctor Torres. Because of approaching lava, about 5,000 residents of the towns of El Paso, Llanos de Aridane and the seaside resort of Tazacorte on the west coast of the island were brought to safety. With 500 of them, it had been tourists. Whether also Germans were under it, was not known at first. Several country houses went up in flames when they were reached by the around 1000 degrees hot lava.

Firefighters fought bushfires caused by the volcanic eruption. The authorities called on the population to remain calm. The eruption was not particularly explosive so far, they said. Onlookers were asked to leave the area so as not to hinder evacuations.

La Palma is located in the far northwest of the Canary Islands, a group of islands in the Atlantic Ocean off the west coast of Africa. It is 85 kilometers from the better-known island of Tenerife and 57 kilometers from La Gomera.The eruption had been announced in recent days by about 6600 small and medium earthquakes and a slight uplift of the ground. The authorities had called on people living near the volcanic area to prepare light luggage with their cell phones, important documents and any medicines they may need.On the youngest of the Canary Islands, there had last been a volcanic eruption 50 years ago, when TeneguÃ­a spewed lava into the air in 1971. Mass tourism like on the better known islands Gran Canaria, Fuerteventura, Lanzarote and Tenerife does not exist on La Palma.